The British newspaper The Guardian already calls Hieronymus Bosch – Visions of Genius one of the most important exhibitions of this century. Whether that is true, we can only say with certainty in 84 years, but superlatives are certainly in order. The show is magnificent. 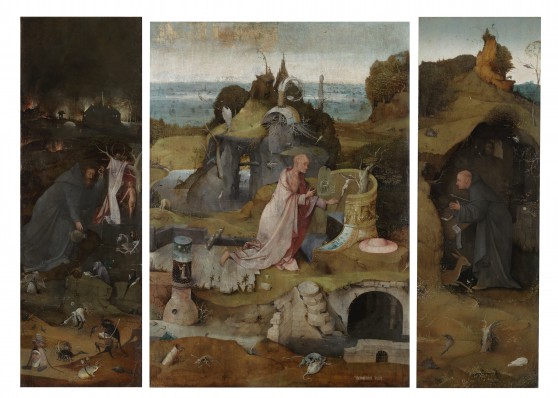 And it is an important one indeed. It’s the first time that the majority of Hieronymus Bosch’s works can be seen at one location. The Noordbrabants Museum displays 18 of the 25 surviving paintings and 19 of the 20 drawings. Therefore, the presentation may be surely called unique.

No wonder that press from home and abroad were gathering in Den Bosch to get an early look at the highly anticipated exhibition. That same press expressed itself so laudatory that the online ticket shop got an overload, a day before the opening. The museum already sold 100,000 tickets. It is quite possible that Hieronymus Bosch – Visions of Genius will be the blockbuster of the year.

The Noordbrabants Museum and the Dutch town of Den Bosch earn such a great success, because they have done an admirable job. In 2001, the seed for this show was planted. In that year Museum Boijmans Van Beuningen in Rotterdam put on an exhibition about Bosch. Mayor Ton Rombouts of Den Bosch (still in office) thought that Bosch’s hometown had to honour the artist with a show as well. 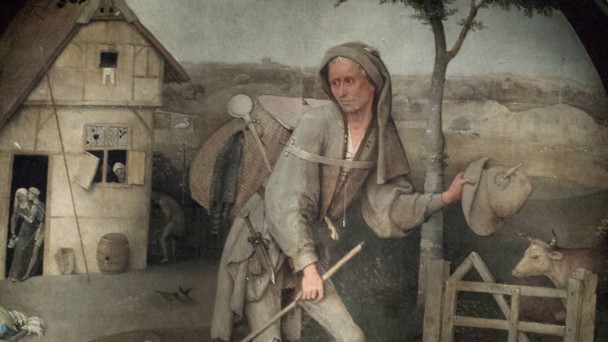 But easier said than done: the city itself owns no work of the artist and The Noordbrabants Museum is relatively small. To increase the chances of success in 2007 the idea arose for a large research program, the Bosch Research and Conservation Project. Many foreign museums were willing to lend out pieces in exchange for investigation and if necessary restoration of their works by Bosch. The team even discovered ‘new’ work by Bosch, like The Temptation of Saint Anthony from the collection of the Nelson-Atkins Museum of Art in Kansas City. And now, exactly 500 years after Bosch’s death, that painting is back in the city where he made it. The lion’s share of his work is.

The painter was born around 1450 in Den Bosch as Jeroen van Aken. Not sooner than 40 years later he became Hieronymus Bosch. The painting John on Patmos – Passion (1490-95) is the first work he signed with that name. As Hieronymus (the Latin version of his real name) he presented himself as an educated and confident painter.

The surname Bosch he probably chose because he wanted customers to be able to find him. They could have thought that he lived in the German city of Aachen (Aken in Dutch). First and last name fit together perfectly: according to ancient scriptures Hieronymus means sacred forest. Bos (modern spelling of bosch) is the Dutch word for forest.

He was a pioneer in many areas. Before Bosch, people on paintings were mainly biblical figures and saints. He was the first to paint a vagabond. Also his interpretation of the road to heaven – a tunnel of light – was completely new. With the work Ecce Homo, he was again far ahead of his time. He gave some characters dialogue, like in a comic. And no artist before him made a drawing as self-contained work, but more as a study or sketch. Not Bosch: his drawings were independent works of art. 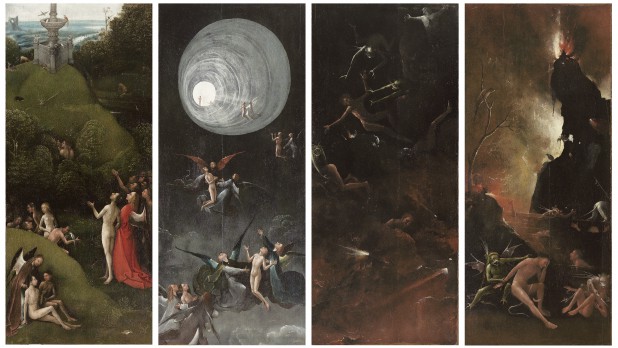 Infernal Landscape for example, is an extremely detailed drawing, full of bizarre monsters and other strange beings. It’s the first time this work is shown as a genuine Bosch. Long it was thought to be a drawing by an anonymous artist. Early last year, the Bosch Research and Conservation Project attributed it to Bosch. The drawing is very Boschian and shows hell, a place where you really do not want to be. People sit on the sharp blade of a knife, others are bell clappers, and many end up in a cooking pot.

Bosch dealt in wondrous creatures that appear to come from dreams. Like those on the fantastic Hay Wain, which is back in the Netherlands for the first time since 1570. The Spanish King Philip II bought the triptych that year and it has since then never left Spain. The narrative work shows a procession of people walking behind a hay wagon, straight to hell. Strange creatures are towing the wagon. 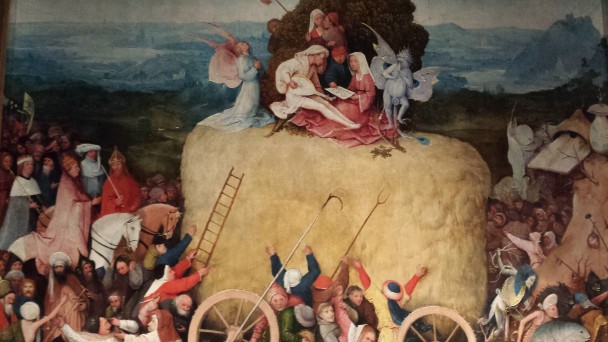 In the foreground, the artist painted medieval scenes with drunken monks, teeth pullers, merry musicians and fortune telling gypsies. The Hay Wain is one of the first paintings in art history with everyday scenes. This work is therefore another example of Bosch’s progressiveness. In his time he was perhaps even a genius, like he is being called in the exhibition title.

There are a lot of details on the Hay Wain and visitors can see all of them very well. The triptych and all other works hang behind strikingly clear glass, which makes it possible to come very close, without touching the panels. Because of the showcases even the rear sides of triptychs are visible. The presentation is beautiful, down to the smallest detail. The exhibition space itself is dark, but the lighting of the works is great. Low lighting creates tranquillity and focuses on those familiar outlandish details that linger so well.

With the exhibition the museum tells a clear story about one of the greatest medieval painters in history. The very interesting audio tour adds much to this story and is worth the extra 3 Euros. 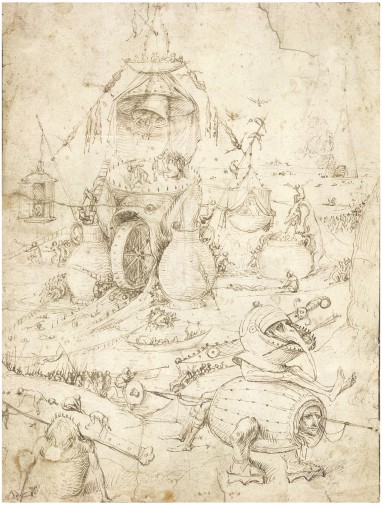 The exhibition about Bosch shows that a museum does not need to be big and famous to create a formidable presentation. It’s very special that the curators were able to bring together almost all of the works of the artist. The team earns much respect for that.

The triptych Garden of Earthly Delights is missing, but the curators never bothered to ask for it anyway. This ‘Night Watch’ of Spain never leaves Museo del Prado in Madrid. It is not a loss; the show is perfect as it is.

Hieronymus Bosch – Visions of Genius, up to and including 8 May at The Noordbrabants Museum, Den Bosch 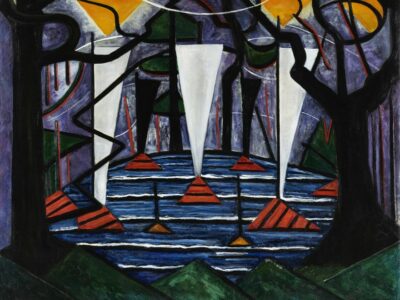 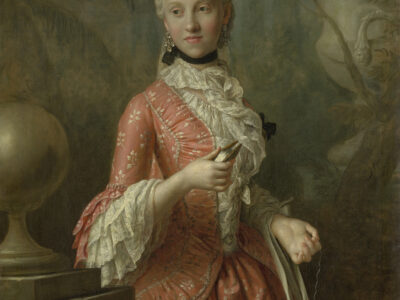 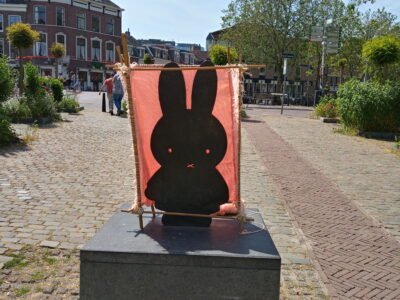 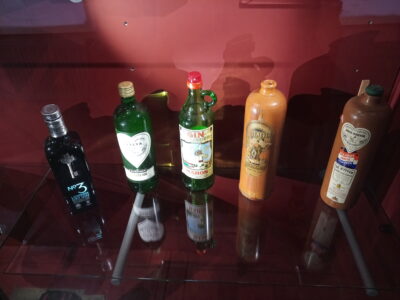 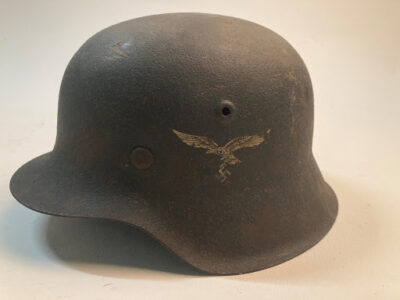 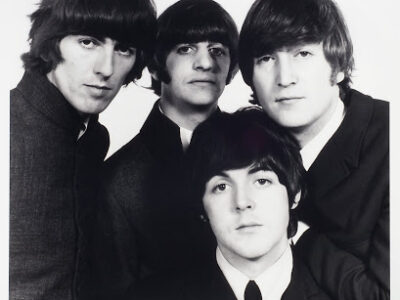 The Beatles in Herman Brood Museum